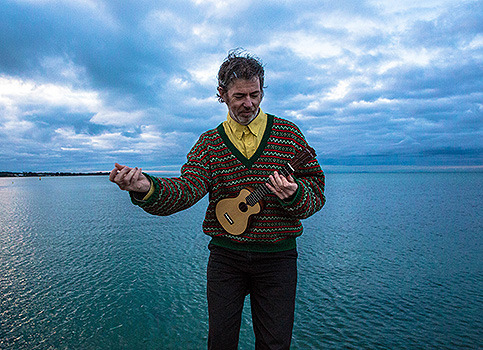 ABC- I have heard some people say that you are the best ukulele player in Australia?

ABC-Whether it’s true or not, it could be meant as some kind of recognition.

AJ-I think having recognition is more important than being the best. It means you must be doing something right. I would rather be known as an innovator than having the best chops. As John Wayne said, “Courage is being scared to death but saddling up anyway.”

ABC-What made you become a full time ukulele player?

AJ- Fame, fortune, women…(laughs) As it turns out, it was one of the best career decisions I ever made. I’ve made a few dud choices over the years but I’m so glad I made a conscious move toward all things ukulele. In 2006 I had a music gig in Nebraska and decided to visit Hawaii on the way home and purchase a new ukulele. I guess you could say I developed a serious itch for the jumping flea.

ABC-I understand that you started playing ukulele in the 70’s, why did you wait so long to pursue it more seriously?

AJ- Being a multi-instrumentalist and full time musician, I got side tracked over the years searching for new forms of expression and making a living. In the process I learned much and gained priceless experience in many musical contexts. My number one hobby is listening to music and I’ve always wanted to produce music that other people can enjoy. I’ve gained a greater appreciation of the past especially in regards to music and its influence on me as a writer and arranger and of course the ukulele draws it all together. Also when I record now I am able to draw on my years of experience and as a special treat I allow myself the occasional wild electric guitar solo!

ABC-There is a growing worldwide movement for the ukulele. Can you explain it and how do you see yourself as part of that?

AJ- The ukulele has had three golden ages and the one thing they all have in common is new technology. The Twenties had radio, the Fifties, television and the Noughties the internet. But the ukulele has never been more important than it is now even if you just look at its worldwide appeal. It is finally shaking off its stigma as a second-rate instrument or figure of fun. The ukulele is a traditional instrument of a country as is the guitar, mandolin, violin etc. I strongly identify with the music of Hawaii where the ukulele has never been a novelty. Hawaii has produced many great players to whom I owe a debt of gratitude. When I first started I was also fortunate to learn techniques and an appreciation for the ukulele from a Tin Pan Alley veteran.

My role in all of this is divided three ways: as a performer, recording artist and teacher. And with these forms of communication I am here to inspire, enlighten and entertain.

A track from Vol 2 of the 12 Seasons featuring the exquisite sound of the Barron River super-soprano
0:00/???
"I would rather be known as an innovator than having the best chops." 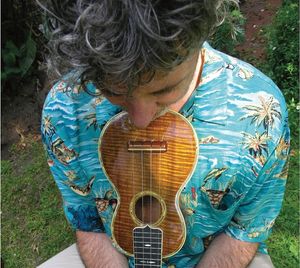 "I’ve always wanted to produce music that other people can enjoy."